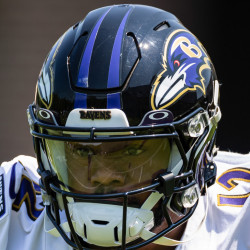 Baltimore Ravens wide receiver Rashod Bateman has had a fantastic start to the 2022-23 campaign. He's caught only eight catches. Yet, he's accumulated 226 yards and two touchdowns while amassing an impressive 28.3 yards per catch. Although the Bills defense poses a challenge in Week 4, Bateman's ability to make big plays down the field always keeps him in play for fantasy managers. However, his lack of volume negatively impacts him in PPR formats to some degree.

Baltimore Ravens wide receiver Rashod Bateman finished with only two catches for 59 yards during the win over New England in Week 3. Bateman had a touchdown in each of the first two games of the year, so his inability to find the end zone in this one likely disappointed his fantasy managers. In all fairness, the 22-year-old is still one of the best deep threats in the league, currently sitting on four receptions of 20 yards or more. While Bateman's lack of catches won't do as much for PPR managers, he should remain a lock in standard scoring formats moving ahead, at least until he shows consistent signs of slowing down.

Baltimore Ravens wide receiver Rashod Bateman found the end zone in each of the first two weeks of the season but now faces his toughest opponent yet in the New England Patriots. New England was a top-three defense against fantasy wide receivers in 2021 and has been stout to open 2022 as well. Still, Bateman is the obvious WR1 for Lamar Jackson and has proven that he can produce for fantasy with just one big play. Expectations should be lowered a bit this week, but Bateman can be started as a low-end WR2 or flex going forward.

Baltimore Ravens wide receiver Rashod Bateman finished with four catches for 108 yards and a touchdown during the loss to Miami on Sunday. The wideout has now scored in each of the team's first two games of the year. He doesn't appear to be slowing down anytime soon, so fantasy managers should keep him rolling in Week 3 versus the Patriots.

Ravens' WR Rashod Bateman had 4 receptions for 108 yards with one touchdown in Sunday's loss against the Dolphins.

Baltimore Ravens wide receiver Rashod Bateman had only two catches in Week 1 against the Jets. However, he made amends for his lack of volume by accumulating 59 receiving yards and scoring a touchdown. With that said, Bateman will need to step things up during a much more challenging Week 2 matchup with the Miami Dolphins. Nonetheless, the 22-year-old will probably have some off weeks throughout the season. Yet, until the former Golden Gopher underwhelms consistently moving ahead, he should remain a starting fantasy wideout.

Baltimore Ravens wide receiver Rashod Bateman is now the clear-cut No. 1 option on the depth chart after the team traded Marquise Brown to the Cardinals. As a result, he has high hopes from the coaching staff, so he'll look to positively begin the year against the Jets on Sunday. Undoubtedly, Mark Andrews is forecasted to remain Lamar Jackson's preferred target. However, Bateman will be involved more than others throughout the season. That doesn't mean the 22-year-old will be a consistent fantasy performer, as he certainly could fall below expectations occasionally during the season. Still, the upside is there, so managers should at least look in his direction weekly if the matchup is right. The Jets are the right matchup.

Baltimore Ravens wide receiver Rashod Bateman returned to training camp practice on Monday after he missed practice on Friday with an undisclosed injury. It never seemed like a very serious, but fantasy managers shouldn't need to worry about the team's No. 1 receiver moving forward. The 22-year-old former first-rounder will have added opportunities in the passing game with Marquise Brown now in Arizona. In his first year in the NFL in 2021, Bateman caught 46 of his 68 targets for 515 yards and one touchdown in 12 games (four starts). Fantasy managers should consider him a low-end WR2/high-end WR3 with upside heading into his second season in the league.

Dynasty | Ravens third-year receiver James Proche is having another strong camp in 2022 Dynasty Analysis: Proche was yet another Twitter darling as a rookie in 2020 and registered a single catch in his rookie campaign before turning heads during 2021's training camp. He improved in his sophomore season to compile a 16/202/0 stat line, not nearly enough to raise his dynasty stock. Now in 2022, the rookie has been mentioned again as a strong performer in camp, but this year with an even more wide open depth chart behind sophomore WR1 Rashod Bateman. By all accounts, any of the remaining receivers behind Bateman could factor as a starter but, until we see otherwise, it's difficult to project any to greater fantasy impact. James Proche, unranked on DLF's receiver rankings, is a name to watch in his age-26 season, but need not be added at this time.

Baltimore Ravens wide receiver Rashod Bateman is dealing with an undisclosed minor injury at training camp, according to head coach John Harbaugh. Bateman missed Friday's practice, but Harbaugh said the 22-year-old probably could have practiced. He might sit out for another day or two, but fantasy managers shouldn't be concerned at all. With Marquise Brown now in Arizona, Bateman will be Baltimore's No. 1 receiver in 2022. The former first-rounder had 46 catches on 68 targets for 515 yards and one touchdown in 12 games (four starts) in his rookie season, but he should take a step up in Year 2 while hopefully becoming more of a downfield option for quarterback Lamar Jackson. Bateman should be considered a low-end WR2/high-end WR3 with upside in fantasy drafts.

Dynasty | Ravens receiver Rashod Bateman looks comfortable as the number-one guy. Dynasty Analysis: Head coach John Harbaugh lauded Bateman's day-to-day consistency as the second-year player tries to fill the void left by the traded Marquise Brown (ARI). The team did surprisingly little following Brown's trade, seemingly content with the inexperienced receiver room behind Bateman, himself only a sophomore in the league. By all appearances, the Ravens will be returning to their run-first roots with Lamar Jackson and J.K. Dobbins leading the way. Appearing in 12 games following a pre-season injury which cost the, then, rookie his first four games, Bateman eventually produced 515 yards and one touchdown on 46 receptions. He's an easy bet to surpass that productivity in 2022, and should threaten for his first 1,000 yard campaign. He's listed as DLF's WR18.

Baltimore Ravens wide receiver Rashod Bateman made Pro Football Focus and ESPN's list of second-year breakout candidates. Although Mark Andrews is in line to be the No. 1 receiving option, the sophomore wideout may thrive now that Marquise Brown is in Arizona. When also considering Baltimore has Devin Duvernay, James Proche II, and Tylan Wallace, among others, listed on the depth chart, Bateman doesn't have much quality competition for looks from Lamar Jackson. Nevertheless, with the team expected to throw more often in 2022-23, the former Golden Gopher should draw interest from managers in all fantasy formats.

Baltimore Ravens wide receiver Rashod Bateman had a decent rookie year, finishing with 46 catches for 515 yards and one touchdown. However, that was with Marquise Brown on the roster. But after Hollywood was dealt to the Arizona Cardinals during the 2022 NFL Draft, Bateman is now projected to be the team's No. 1 wideout on the depth chart. He clearly can make some noise from a fantasy standpoint, with tight end Mark Andrews recently taking the time to praise the speedster due to his speed and ability to run routes. With Baltimore looking to utilize the passing attack more often this season, Bateman is someone to watch, although his outlook won't be as bright if Lamar Jackson doesn't return to MVP form.

Baltimore Ravens wide receiver Rashod Bateman is anticipated to be the No. 1 option at the position after the team traded Marquise Brown to Arizona. Baltimore is also looking to utilize the deep ball more often moving ahead, so Bateman will be expected to play a pivotal role in that area. The 22-year-old finished his rookie season by catching 46 balls for 515 yards and one touchdown throughout 12 appearances. He also averaged 11.2 yards per catch, but after averaging 16.3 yards per reception during his collegiate career, it's evident the wideout could flourish under a new offensive philosophy. However, with Lamar Jackson hinting at a potential holdout, Bateman may not be as productive without him.

Baltimore Ravens wide receiver Rashod Bateman said he's more comfortable heading into his second NFL season. A groin injury he suffered in training camp that required surgery cost him the first five games of his rookie season. Bateman and quarterback Lamar Jackson played only seven games together, but the two have already gotten together for throwing sessions this offseason. The 22-year-old finished with 46 catches for 515 yards and a touchdown in 12 games, but Bateman said his groin injury "affected me a lot." Bateman will play a large role in Baltimore's passing attack in 2022, and with a full season with Jackson, the two could do some serious damage.