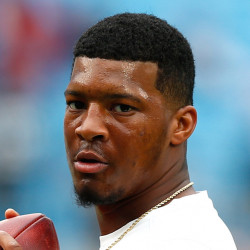 New Orleans Saints quarterback Jameis Winston (foot) is being listed as day-to-day with a sprained right foot, according to head coach Dennis Allen. Allen initially said that Winston rolled his ankle in training camp practice on Monday, but it was later clarified that he suffered a minor foot injury. Winston, who is also recovering from a torn ACL suffered last year, will not play in Saturday's preseason opener against the Houston Texans out of caution. Expect to see Andy Dalton and Ian Book taking most of the snaps this weekend. The 28-year-old Winston isn't 100% recovered from his knee injury, but he's fully expected to be ready for Week 1 of the regular season. Fantasy managers should consider him a QB2 with upside in the right matchups.

New Orleans Saints QB Jameis Winston (foot) is considered day-to-day after suffering a foot injury during practice Monday, Aug. 8. Winston is not expected to play in the preseason opener Saturday, Aug. 13, against the Houston Texans.

Fantasy Spin: Hopefully, some rest over the next few days will alleviate the problem for Winston, whose 2021 season was cut short due to a torn ACL. Winston is an intriguing option for late-round QB drafters and should hold plenty of value as a QB2 in superflex leagues as well.

New Orleans Saints quarterback Jameis Winston (foot, knee) injured his foot in practice on Monday. It was not believed to be serious at the time and was confirmed to be of little concern later that evening. In a post on Tuesday morning, the injury was described as "not serious," but it will keep Winston from participating in the Saints Week 1 preseason game against the Texans on Saturday. This will allow Andy Dalton and Ian Book to get more repetitions, neither of which are a threat to be the starter as long as Winston is healthy.

Updating a previous report, New Orleans Saints QB Jameis Winston (foot) is doing well, and there's nothing to worry about, according to a source.

Fantasy Spin: Winston is already coming off a torn ACL, and the foot ailment further hampers his base. He has the potential for some solid passing stats, but he offers nothing on the ground in a position that is stacked. He'll be a QB2 or a low-end QB1 if everything aligns perfectly.

New Orleans Saints quarterback Jameis Winston (foot) left training camp practice on Monday after injuring his foot, but one source said "he's doing well and feels fine. So nothing to really worry about." It was initially reported that Winston rolled his ankle, but it turned out to be a foot injury. The 28-year-old is also recovering from a torn ACL and MCL in his left knee suffered last year and isn't quite back to 100 percent, although he's fully expected to be ready for Week 1 of the regular season. While he's likely to sit out of practice for a few days, Winston appears to have dodged a bullet with his foot injury. Expect veteran backup Andy Dalton to work with the first-team offense in camp until Winston is back on the field. He'll be a low-end QB2 in fantasy this year, although he could have streaming upside in the right matchups later in the year.

New Orleans Saints quarterback Jameis Winston (ankle) rolled his ankle in training camp practice on Monday and is undergoing further evaluation. With Winston leaving, veteran Andy Dalton took over his repetitions in 11-on-11 work. Winston is attempting to return this year from a torn ACL that he suffered in Week 8 of last season, so this is yet another setback, although we don't know the severity of his ankle injury just yet. Although Winston isn't 100 percent yet with his knee, the expectation is that he'll be ready for Week 1 of the regular season. If Winston were to miss time again in 2022 due to injury, Dalton would be first in line for starting QB duties, although quarterback-turned-tight-end Taysom Hill could also see some snaps under center. Stay tuned for more information on Winston's ankle injury.

New Orleans Saints quarterback Jameis Winston (knee) is about where the Saints want him to be as he recovers from a significant ACL tear. He is not 100 percent recovered and is still wearing a big, bulky knee brace on his left leg. NFL Network's Ian Rapoport recalls that Cincinnati Bengals quarterback Joe Burrow took around a month into last year's regular season before he regained his full mobility coming off his ACL tear. It could be a similar trajectory for Winston in 2022. The 28-year-old QB threw for 1,170 yards, 14 touchdowns and only three interceptions in seven games before his injury last year for the Saints, and he has plenty of weapons in the passing game now that Michael Thomas (ankle) is back. Still, coming off a major knee injury, Winston should be treated as a QB2 in fantasy.

Fantasy Spin: Winston appears to have recovered from his injury and will enter the season as the starting quarterback. He will have a good group of pass catchers to work with this season and could be a No. 2 quarterback in fantasy leagues.

New Orleans Saints head coach Dennis Allen said that quarterback Jameis Winston (knee) will participate in team drills at training camp after he didn't really take part in team drills during organized team activities this spring. Winston has made steady progress since tearing his ACL in Week 7 of 2021, and all signs point to him being ready to go as the Saints starting QB in Week 1. The 28-year-old completed 59% of his 161 pass attempts for 1,170 yards, 14 touchdowns and only three interceptions in seven starts last year, and this year he'll be getting Michael Thomas (ankle) back while also having new wideouts Chris Olave and Jarvis Landry. Fantasy managers shouldn't be comfortable with Winston as their QB1, but he's certainly quite intriguing as a strong backup in his third new in the Big Easy.

New Orleans Saints quarterback Jameis Winston (knee) is working his way back after suffering a torn ACL in Week 8 last year. Despite that, Winston is expected to be ready to suit up for Week 1. All signs are positive right now, but the Saints will likely take it slow during the beginning of training camp. Before going down, Winston threw 14 touchdowns with three interceptions through seven games in New Orleans. As of now, Winston is considered a low-end QB2, but he could outperform that. The Saints have bulked up at wide receiver with Jarvis Landry and Chris Olave. Also, stud wideout Michael Thomas is expected to be fully healthy to begin the season. Fantasy managers shouldn't be shocked if Winston is able to carve out some QB1 value in 2022.

New Orleans Saints QB Jameis Winston (knee) is expected to be medically cleared to play once the regular season begins, according to NFL Network's Ian Rapoport.

Fantasy Spin: Winston may not do a lot during the preseason but will be the starting quarterback in Week 1. He has played well at times in the past but probably will be a No. 2 quarterback in fantasy leagues.

New Orleans Saints quarterback Jameis Winston (knee) posted a video on Instagram that shows him doing throwing drills without a brace on his left knee. Winston's recovery from a torn ACL last year has gone well enough that he was on the field during organized team activities, and now it looks like he's removed his brace. He wore the brace through OTAs and minicamp and said the plan was to wear the brace throughout the 2022 season. Barring any setbacks in training camp this summer, the 28-year-old is on track to be ready for the start of the regular season as the Saints starting QB. Winston could be getting a healthy Michael Thomas (ankle) back and he also has first-round wideout Chris Olave at his disposal, but he should still be viewed as more of a low-end QB2 coming off a serious injury.

New Orleans Saints QB Jameis Winston (knee) posted a video of him throwing to social media without a knee brace.

Fantasy Spin: He looks to be progressing well as there were reports he was still limping at the end of May. He's a QB2 in fantasy.

Dynasty | Saints receiver Michael Thomas was seen running routes in an Instagram video Dynasty Analysis: Hampered by an ankle injury suffered back in 2020, Thomas has seen his dynasty value plummet over the past two years and it's a good sign that it appears he's finally healthy again based upon the video. That said, now 29, Thomas is found as DLF's WR46 and is now squarely best utilized for competing dynasty teams willing to acquire the risk-on asset. If healthy, setback free and if he and new quarterback Jameis Winston can establish chemistry, Thomas should easily find himself the WR1 once again for the Saints and possess upside potential for the next two or three seasons.

Dynasty | While only with the team a short time, the Saints newest receiver Jarvis Landry has dominated during OTAs Dynasty Analysis: Landry is reeling in catches and reportedly bringing "juice" and attitude, something the team badly needs from its receiver room. In his age-30 season, Landry is a veteran receiving presence who should see plenty of targets from Jameis Winston, a quarterback who was a primary reason for joining the Saints. On a one-year deal, the veteran will have every incentive to produce as he seeks a longer term deal in 2023. The possession-receiver is found as DLF's WR69 and will seek to reverse a three-year trend of declining production.

Fantasy Spin: It's still early in the offseason, and he has plenty of time to come back from a torn ACL. Winston will be a QB2 in fantasy even at full health.

New Orleans Saints quarterback Jameis Winston (knee) was moving with a visible limp during organized team activity practices last week. Winston had surgery to fix a torn ACL that he suffered in Week 7 of last year, and he's around six months removed from the surgery. He also had a brace on his left knee, and NewOrleans.Football's Nick Underhill said that Winston has some more work to do in his recovery. It was good to see the 28-year-old on the field with his teammates, but it's clear he's not fully recovered just yet. The Saints expect Winston to be ready for training camp this summer, and barring any setbacks, he'll be the team's Week 1 starter. With Michael Thomas (ankle) returning and the addition of rookie Chris Olave, Winston will have more targets in the passing game in 2022.

New Orleans Saints quarterback Jameis Winston (knee) did almost everything at organized team activities on Thursday, which is a great sign. Winston also practiced on Wednesday and remains on track to be ready for Week 1 of the regular season after tearing his ACL last year. Fantasy managers will want to keep eye on the 28-year-old's progress throughout the offseason training program and into training camp this summer. But if he continues to progress well and doesn't suffer any setbacks, he'll be an intriguing low-end QB1 target if wide receiver Michael Thomas (ankle) can return healthy as well after missing all of last season. The Saints also drafted rookie wideout Chris Olave in the first round to give Winston another prominent weapon in the passing game.

New Orleans Saints quarterback Jameis Winston (knee) was spotted doing on-field drills during OTAs on Wednesday, contradicting previous reports suggesting he wouldn't be attending. The veteran tore his ACL in Week 8 and missed the remainder of the 2021 season. However, he appears to be moving in the right direction, with the hope remaining that he can suit up for Week 1. Nevertheless, if Winston can stay healthy, he'll have a chance to be an impactful fantasy presence, primarily since he'll have Alvin Kamara, Michael Thomas, Jarvis Landry, and Chris Olave as his targets. He may not be considered a week-to-week fantasy option at the moment, but that could very well change.