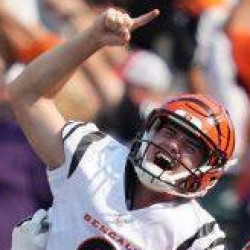 Cincinnati Bengals kicker Evan McPherson was perfect during Sunday's loss to the Cowboys. The 23-year-old shook off a disastrous Week 1 showing against the Pittsburgh Steelers by nailing all three field goal attempts, with each of those kicks occurring beyond the 40-yard mark. It didn't take McPherson long to get back on track, so he should be starting in Week 3 versus the New York Jets.

Cincinnati Bengals kicker Evan McPherson got off to a fantastic start during the Week 1 loss to the Steelers, nailing a 59-yard boot in the first quarter. He followed that up with a 26-yard kick near the end of the first half. Yet, after long-snapper Clark Harris (bicep) exited due to injury, tight end Mitchell Wilcox filled in. However, McPherson struggled for the remainder of the afternoon, getting a potential game-winning PAT blocked before hooking a 29-yard field goal try in overtime. Nonetheless, the 23-year-old should be just fine moving ahead. Still, if McPherson botches in Week 2 versus the Cowboys, fantasy managers may consider other options until he demonstrates he's back on track.

Cincinnati Bengals kicker Evan McPherson looks to build off an impressive rookie year against the Steelers on Sunday. The 23-year-old finished last season by nailing 28 of his 33 attempts, including going 9-for-11 from beyond 50 yards. Despite his youth, McPherson is already is considered one of the top kickers in the league for a reason, and a potent Bengals' offensive approach should continue to put him in a position to succeed. Fantasy managers must start him in Week 1 and the rest of the season, for that matter, at least until he begins to slow down. However, that isn't expected to happen anytime soon.

Cincinnati Bengals kicker Evan McPherson looked fantastic during the exhibition win over the Los Angeles Rams on Saturday evening. The sophomore nailed all three of his kicks and was essential to his team's success throughout the preseason matchup. Nonetheless, after an impactful inaugural campaign, McPherson has a solid chance to finish this 2022-23 campaign as the top fantasy kicker, especially with the Bengals' Offense expected to have no issues getting the ball into scoring range.

Cincinnati Bengals kicker Evan McPherson made three of his four field goal attempts during the preseason loss to the Giants. After going a perfect 3-for-3 against the Arizona Cardinals, he missed his first field goal of the preseason on Sunday. To be fair, it was a 58-yard attempt, so fantasy managers shouldn't be overly concerned. Nevertheless, after a fantastic rookie campaign, the 23-year-old has a solid chance to finish as the year's top fantasy kicker, especially with the Bengals' offense expected to have no issues advancing the ball.

Cincinnati Bengals kicker Evan McPherson doesn't appear to have lost a step heading into the 2022 campaign. The fifth-round kicker had a surprising breakout campaign last season. Now, there is more pressure on McPherson with everyone watching as he has become one of the more reliable kickers in the game. On Friday, McPherson connected on all three of his field goal attempts in the preseason loss to the Arizona Cardinals. His long on the day was a 58-yarder, so he appears to be in mid-season form. It looks like McPherson is going to be one of the better kicking options in fantasy leagues once again.

Cincinnati Bengals kicker Evan McPherson was an effective fantasy option throughout his first year at the professional level. He nailed 28 of his 33 attempts and only missed two of his 11 tries from beyond 50 yards. Heading into the 2022-23 campaign, McPherson is anticipated to elevate his play to an even higher level. The 22-year-old recently connected on a 63-yard attempt on the final day of mandatory minicamp, and considering the Bengals are expected to field one of the best offensive units in the league, McPherson has an excellent chance of finishing the season as the most productive fantasy kicker.