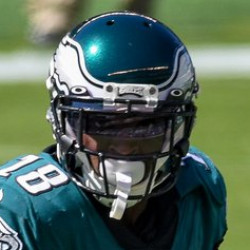 Minnesota Vikings wide receiver Jalen Reagor has been a player that has caught the eye of new head coach Kevin O'Connell. O'Connell mentioned that the team needs "to find ways to activate what he does well," while going on to say that he thinks "this offense provides him a real platform." Although the former first-round pick could be a good fit with his new team, there is a lot of competition for targets as Justin Jefferson, Adam Thielen, and K.J. Osborn headline the wide receiver core in Minnesota. Despite being in a pass-heavy offense, the third-year wideout likely needs somebody ahead of him to miss time to have any fantasy relevance. He can be left on waivers to open the 2022 season.

Dynasty | The Eagles are reportedly trading receiver Jalen Reagor to the Vikings Dynasty Analysis: By all accounts, Reagor has been healthy all camp and has been a consistent performer. His prospects don't improve markedly as he'll slot-in no better than fourth on the depth chart behind Justin Jefferson, Adam Thielen and K.J. Osborn. He may even be in competition directly with Ihmir Smith-Marsette who has flashed on occasion. As for Reagor, he's been a bust since being a first-round selection during the 2020 NFL Draft but, entering his third year and still only 23 -years-of-age, there's plenty of time for the receiver to get his feet under him in Minnesota and produce into his second contract. He's listed as DLF's WR102.

Dynasty | Eagles wide receiver Jalen Reagor was not among their final roster cuts. Dynasty Analysis: Reagor was rumored to be on the outside looking in, but he performed well enough to get one more shot this year with the Eagles. Still, AJ Brown and Devonta Smith are the clear top targets for Jalen Hurts and this offense is going to run the football a ton, making Reagor a risky bet for any kind of fantasy production. Reagor can likely be held on to for a bit, but a slow start should put him back in the waiver pool. He currently comes in as our WR102.

The Minnesota Vikings acquired wide receiver Jalen Reagor from the Philadelphia Eagles on Wednesday in exchange for a 2023 seventh-round draft pick and a 2024 conditional fourth-round pick that would become a fifth-rounder if certain statistical marks are not met, according to sources. Reagor, a former first-rounder in 2020, disappointed in his two seasons in Philly, catching 64 of 111 targets for 695 yards and three touchdowns in 28 games (24 starts). He'll join an already crowded Vikings group of pass-catchers in Justin Jefferson, Adam Thielen and K.J. Osborn. Minnesota should be a pass-happy offense under new head coach Kevin O'Connell, but unless an injury opens up a bigger role for Reagor, he'll still likely belong on the waiver wire in standard 12-team leagues. Reagor's presence is certainly bad news for Osborn's chances of a third-year breakout.

Philadelphia Eagles wide receiverJalen Reagorcaught two of his four targets for 17 yards during Sunday's preseason win over the Cleveland Browns. Many were looking for the former first-round pick to impress against the Browns' backups, but he again put up a lackluster preseason performance. Reagor is clearly well behindA.J. Brown,DeVonta Smith, andQuez Watkins on the wide receiver depth chart, but Zach Pascalcould be moving ahead of him after reports of him impressing in camp. With reserve wide receivers likeDeon CainandDevon Allenposting bigger numbers in this game and showing more explosiveness than Reagor, the rumors that the former TCU alum is on the roster bubble could be eerily accurate. Reagor is an easy fade in redraft leagues and could see the majority of his dynasty value evaporate unless he is traded to a receiver-needy team.

Dynasty | Eagles receiver Jalen Reagor is in good shape and has been consistent in camp Dynasty Analysis: The third-year receiver is in a true make or break season and is fighting to be the WR3 with Quez Watkins. For Reagor's first two seasons, inconsistent routes, drops and inability to separate from press coverage were all too common as the former Twitter darling began to slip down rankings. Now ranked as DLF's WR101, he's in danger of falling completely from the dynasty radar and may have upside appeal given his low ranking and expectations.

Philadelphia Eagles wide receiver Jalen Reagor continues to stack good days at training camp in what has definitely been his most consistent camp as a professional. At the moment, he looks too good to consider releasing, in the opinion of The Athletic's Bo Wulf, although a trade remains on the table. The former first-round pick has been a disappointment through his two NFL seasons, compiling 64 catches (111 targets) for 695 yards and three touchdowns in 28 games (24 starts). The 23-year-old will probably only be fantasy relevant if he's traded to a team that gives him a realistic chance to start. As things stand now in Philly, he's behind the likes of A.J. Brown, DeVonta Smith, Quez Watkins and Zach Pascal.

Philadelphia Eagles head coach Nick Sirianni said that wide receiver Jalen Reagor "is battling for a spot" at training camp this summer. Reagor has been working with the second-team offense in training camp practices so far after being a first-round pick in 2020. The 23-year-old hasn't done much to justify a roster spot in his first two seasons, catching only 64 of 111 targets for 695 yards and three touchdowns in 28 games (24 starts). He got bumped even further down the depth chart this offseason when the Eagles traded for No. 1 wideout A.J. Brown. The Eagles also have DeVonta Smith, Quez Watkins, Zach Pascal and Greg Ward, among others, at the position. As of right now, Reagor is off the fantasy radar heading into the 2022 season.

Philadelphia Eagles wide receiver Jalen Reagor won't be dealt ahead of the 2022-23 season. This revelation came from general manager Howie Roseman, who appeared to shut down trade rumors by recently stating, "Jalen Reagor is a Philadelphia Eagle, and he's going to be here. He's worked tremendously hard to get in shape and come into this offseason program. We don't anticipate that changing." The latest update contradicts a report indicating otherwise, especially after the team acquired A.J. Brown from Tennessee during the NFL Draft. Nonetheless, while anything can change, it appears the 23-year-old will be on the roster moving ahead. Yet, with Brown, DeVonta Smith, Quez Watkins, Zach Pascal, and Greg Ward listed on the depth chart, Reagor's path to fantasy relevancy won't be an easy one.

The Philadelphia Eagles are open to listening to trade offers for wide receiver Jalen Reagor, according to league sources. Reagor was taken 21st overall in the 2020 draft, but he has largely fallen out of the receiver conversation in Philadelphia due to two underwhelming seasons. A change of scenery could be best for all parties, and if Reagor is back in 2022, the Eagles won't be banking on him as a primary option alongside DeVonta Smith and Quez Watkins. The Eagles also brought in Zach Pascal in free agency and could target receiver in this week's draft. A trade for San Francisco 49ers wideout Deebo Samuel seems unlikely, so it's more plausible that the Eagles take a pass-catcher with one of their two first-round selections on Thursday. Multiple executives say that Alabama's Jameson Williams is Philly's preference at No. 15 overall.