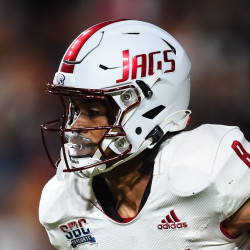 Dallas Cowboys rookie wide receiver Jalen Tolbert (hamstring) returned to practice on Tuesday and had his largest workload yet this spring, with a lot of his repetitions coming in the slot. Tolbert also caught a touchdown pass from quarterback Dak Prescott. The 23-year-old looks to be past a hamstring injury that limited him during organized team activities. With Michael Gallup (knee) questionable for the start of the regular season, Tolbert could open the year with a pretty significant role in Dallas' offense. He'll compete with James Washington for targets behind No. 1 wideout CeeDee Lamb. Remember Tolbert's name in deep leagues as a decent late-round flier.

Dallas Cowboys wide receivers James Washington (foot) and Jalen Tolbert (hamstring) didn't participate in team drills at organized team activities on Thursday, but Washington was able to do resistance work off to the side and Tolbert did individual work with the punt-return group. Washington was in a walking boot last week, but he's already ditched that and appears to be on the mend. The 26-year-old will eventually compete with the rookie Tolbert for a substantial role to begin the season, especially if Michael Gallup (knee) isn't ready for Week 1. It will be a position battle worth paying attention to for fantasy managers during training camp this summer.

Dallas Cowboys wide receiver Jalen Tolbert has agreed to a four-year contract. The third-round rookie could be a legitimate threat early in the season. Michael Gallup (knee) is still recovering from an ACL injury, so Tolbert should see a decent amount of snaps. He finished with 82 receptions, 1,474 receiving yards, and eight touchdowns in 12 games during his final year at South Alabama. Tolbert sounds like someone who is worth snagging as a second or third round dynasty stash.

Dallas Cowboys third-round wide receiver Jalen Tolbert has a chance to make the biggest immediate impact of all the team's rookies this year. Michael Gallup's knee injury could make him unavailable to begin the year, and pass-catchers Amari Cooper and Cedrick Wilson are playing for different teams. CeeDee Lamb, James Washington and Tolbert could be Dallas' top-three wideouts to begin the season. Tolbert saw significant work in the slot last year at South Alabama and is confident in his ability to play all over the field. In his senior season, the 23-year-old had 82 catches for 1,474 yards and eight touchdowns on 136 targets. His athleticism doesn't jump off the page, but Tolbert could have some redraft appeal in deeper leagues if Gallup isn't ready for Week 1.