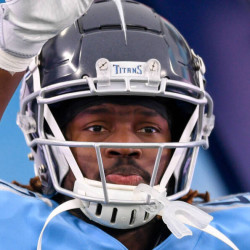 USA TODAY's Mike Moraitis lists Tennessee Titans running backs Dontrell Hilliard, Trenton Cannon, Julius Chestnut and Jordan Wilkins on the roster bubble ahead of training camp, with Derrick Henry, rookie Hassan Haskins and fullback Tony Carter as roster locks. Hilliard is close to a roster lock as one can get, Moraitis suggests, while Cannon is a good bet because of his special teams prowess. The Titans might be looking to lessen the load slightly on Henry this year, but there's no telling who might be the primary backup, as of right now. Most of the available snaps up for grabs will likely be on third downs, and Hilliard has the edge here thanks to experience, but he is vulnerable. He had his struggles in pass protection and is an average pass-catcher. Haskins was a reliable receiver and pass protector in college, but he'll have to prove it at the next level, and his best bet to see snaps in his rookie season is as a rusher.

Tennessee Titans running back Dontrell Hilliard has decided to remain with the organization. The 27-year-old has re-signed with the team, but the details of the deal haven't been announced yet. Hilliard was the lead back for the Titans after Derrick Henry went down mid-season. Through eight games, Hilliard finished with 350 rushing yards and two touchdowns last season. Hilliard and Trenton Cannon will be the change-of-pace backs behind Henry in 2022. It's unlikely Hilliard holds fantasy value unless Henry goes down again.