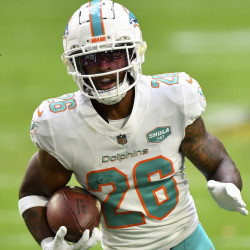 Miami Dolphins running back Salvon Ahmed is in danger of not making the opening-week roster, according to Marcel Louis-Jacques of ESPN. It's no secret Miami has plenty of options in the backfield after acquiring Raheem Mostert, Chase Edmonds, and Sony Michel during the offseason. The team's leading rusher from last season, Myles Gaskin, is also on the roster. However, considering Gaskin has proven to be a better pass-catcher, Ahmed's future with the Dolphins doesn't look promising. Nevertheless, if Ahmed does secure a spot on the depth chart, he's unlikely to see much action in 2022-23. As a result, he probably won't receive any fantasy interest, and rightfully so.

Dynasty | Chase Edmonds is currently at the top of the Dolphins depth chart. Dynasty Analysis: The Dolphins depth chart currently consists of Edmonds, Raheem Mostert, Sony Michel, Myles Gaskin, Salvon Ahmed, ZeQuandre White, and Gerrid Doaks. In short, this is a mess. The most likely scenario this season is all of these running backs fail to have very much real value as they're nearly destined to vulture off each other. On the plus side, Edmonds is likely the best pass catcher of the group and while Mostert and Michel will split carries on early downs, he looks like the favorite to handle the passing game work. Edmonds remains our RB35 at this point in the season.

The Miami Dolphins tendered exclusive-rights free-agent running back Salvon Ahmed and defensive back Elijah Campbell on Tuesday, bringing them both back for the 2022 season. Ahmed will cost the team $895,000 on a one-year deal. In 12 games for the Dolphins last season, Ahmed had 54 carries for 149 yards and no touchdowns while adding 12 catches for 117 additional yards. He'll return in 2022 to provide running back depth behind Myles Gaskin, Duke Johnson and Patrick Laird. Campbell, 26, had just two solo tackles in seven games played for Miami last season.