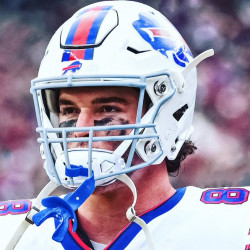 Buffalo Bills tight end Dawson Knox is coming off a tremendous performance against the Kansas City Chiefs in Week 5. He hauled in three receptions for 117 yards and one touchdown in the win. Knox has five touchdowns this season and has shown he can be a reliable red zone target. He should be rostered in basically every fantasy format heading into the Week 6 matchup with the Tennessee Titans. Knox is on the TE1 radar versus a shaky Tennessee secondary.

Buffalo Bills' TE Dawson Knox had 3 receptions for 117 yards with one touchdown in Sunday's win in Kansas City.

Buffalo Bills tight end Dawson Knox has quickly become a weekly option in fantasy leagues. In Week 5, Knox hauled in three of his four targets for 117 yards and one touchdown in the win over the Kansas City Chiefs. Knox has five touchdowns this season and all of them have come over the last four games. It appears Knox is going to remain significantly involved in the gameplan going forward. He is certainly on the TE1 radar for their next matchup against the Tennessee Titans.

Buffalo Bills tight end Dawson Knox has been an unstoppable machine in the red zone lately. He has four touchdowns over his last three games. Last week, Knox saw a season-high eight targets, which is great news for his fantasy value. He's heading into a matchup against the Kansas City Chiefs defense that has allowed the fourth-most fantasy points to tight ends. Knox is certainly in the streaming conversation and is gaining TE1 momentum heading into this favorable matchup.

Buffalo Bills tight end Dawson Knox is beginning to build significant fantasy value with the way he has been playing lately. In Week 4, Knox hauled in five of his eight targets for 37 yards and two touchdowns in the 40-0 win over the Houston Texans. Knox now has four touchdowns over his last three games. He is beginning to be a real threat for this offense in the red zone. Knox could have some low-end TE1 appeal in a matchup against the Kansas City Chiefs next week.

Buffalo Bills tight end Dawson Knox has caught a touchdown in each of the last two weeks. He has made the most of his chances this season, but his value remains minimal. Knox has hauled in 10 of his 12 targets, but has been kept to 107 yards. Luckily, the Houston Texans have allowed the fifth-most fantasy points to tight ends this season. Sadly for Knox, the wideouts in Buffalo get the most love. He'll get his share of targets, but won't be anything more than a high-end TE2 in a favorable matchup against Houston.

Buffalo Bills tight end Dawson Knox has been a tough fantasy player to predict on a weekly basis. He is technically the TE1 in Buffalo, but that doesn't mean a lot considering the wide receivers they have on the roster. Despite that, Knox has been able to put together decent performances through the first few weeks. In Week 3, Knox hauled in four of five targets for 49 yards and one touchdown in the win over the Washington Football Team. This was the second game in a row that Knox has hauled in a score. Sadly, most of his value hinges on whether or not he scores. He'll be on the TE2 radar next week.

Buffalo Bills tight end Dawson Knox has done his job when called upon this season. Through two games, Knox has six receptions on seven targets with one touchdown. Sadly, things aren't going to get easier for him against the Washington Football Team defense in Week 3. A defense that allowed the fourth-fewest amount of yards to tight ends last season. Knox could see a few targets in Week 3, but won't be anything more than a touchdown-dependent TE2.

Buffalo Bills tight end Dawson Knox is often times an afterthought in this offensive gameplan. Although, he hauled in four receptions in the season opener and followed it up with a touchdown in Week 2. Knox hauled in two of his three targets for 17 yards and one score in the win over the Miami Dolphins. It has been a nice start to the season for the third-year tight end. However, things aren't going to get easier for him against Washington in Week 3. He'll be a touchdown-dependent TE2 for that game.

Buffalo Bills tight end Dawson Knox did fairly well during the season opener. He hauled in all four of his targets for 41 yards in the loss to the Pittsburgh Steelers. He averaged over 10 yards per reception against a tough defense. It won't get easier for him against the Miami Dolphins in Week 2. A defense that allowed the sixth-fewest receptions to tight ends last season. Knox should be considered a TE2 for this matchup, but there's never tremendous upside from Knox.

Buffalo Bills tight end Dawson Knox has been a forgotten man in the offense over the last season or so. The Bills have a stacked group of receivers, so often times Knox gets lost in the shuffle. However, he was able to produce a decent game against the Pittsburgh Steelers in Week 1. Knox hauled in all four of his targets for 41 yards in the loss. It wasn't exactly a great performance by Knox, but PPR fantasy managers will take it. He could be a possible TE2 going forward, assuming he continues getting four or five targets per game. For now, most fantasy managers can continue to ignore him until he proves he can do it again.

Buffalo Bills tight end Dawson Knox is often times the lost man for this offensive unit. However, he did scored in five of his last nine games for the Bills last season. Sadly, he'll get a tough matchup to kickoff the season against the Pittsburgh Steelers. A defense that allowed just three touchdowns to tight ends last season. That is tied for the lowest amount by anyone in 2020. The Bills have plenty of other options on offense, so it's unlikely that Knox becomes reliable now. He's a TE2 who is certainly touchdown-dependent for this matchup.

Buffalo Bills tight end Dawson Knox is going to open the season as the starter. Buffalo added depth during the offseason, but none impressed them. Knox will be the No. 1 tight end with Tommy Sweeney as the primary backup. That means, the Bills either believe in Knox or don't plan on using the tight end position often in passing situations. Knox hauled in 24 of his 47 targets for 288 yards and three touchdowns last season. Fantasy managers should expect similar results heading into 2021. Knox is more of a streaming option than anything else in 12-team formats.

Buffalo Bills tight end Dawson Knox could quickly fall out of the No. 1 spot on the Bills roster. Joe Buscaglia believes Jacob Hollister will become the team's starter, assuming Knox continues to struggle. Last season, Knox caught 24 of his 47 targets for 288 yards and three touchdowns. It's worth noting Knox has been working with a vision specialist to help his hand-eye coordination. Hollister was productive in the Seattle Seahawks offense. He could very well give Knox a run for his job during training camp. There is very little reason to select Knox in 12-team leagues. Possibly, a late-round depth option, but he hasn't shown much upside during his two seasons in Buffalo.

Buffalo Bills tight end Jacob Hollister's athleticism and connection with quarterback Josh Allen -- the two played together at Wyoming -- could give him an opportunity in 2021 if Dawson Knox continues to falter early in the season. Hollister moved around well during spring practices and will be worth keeping a closer eye on in training camp at the end of July. Knox must prove himself early on if he doesn't want to lose any starter's repetitions to Hollister. The 24-year-old Knox had just 24 receptions for 288 yards and three touchdowns in 12 games (seven starts) last season. Hollister produced nicely for fantasy managers when he was the starter in Seattle last year and is the more attractive late-round pick in deeper leagues as tight end depth over Knox.